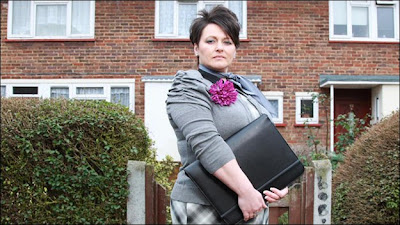 "There are moments when this unpleasant domestic intimacy causes the series to stumble across a distinctly unfunny truth, especially regarding money... but these insights are not allowed to divert the programme from its pre-set route."

Yes! The clash of perceptions was jarring. C4 showed us one story about the unemployed while insistently telling us that we were seeing another story entirely.

Taylor was unassailable though - you can imagine her striding through the ruins of post-nuclear Britain, telling the starving, mutated wretches that they only had themselves to blame for their condition...

Well, it is not an all-or-nothing game. The assumption that everyone can make it and have a good job is obviously flawed for the reasons you mentioned but this doesn't mean you can't. The installation of a "Job Fairy" is against our social democratic sentiments but not against the rules of logic.

You are of course right that the applicants are clueless before the Jobmother Fairy enters their homes and they are clueless after. In between the mundane wonder happens mediated through a priest practising rituals. Ironically this is true for almost everyone else as well, even without a priest, because hardly anyone understands work and those who do are most likely entrepreneurs, managers and a few consultants who observe demand and supply on the job market.

At some point you seem to agree that it must be so and living subconsciously in an economy is the most natural thing to do. The only bad thing is that the infantile fruit-picking world of the Fairy doesn't coincide with reality because of bad circumstances caused by evil enterprises who created a devilish system. This is a position many of us can identify with because we all had downers, some shorter, others longer ( I had one for a year and a half lately ), but it is not complicated and versatile enough to be interesting and leads to little more than protest and resignation.

Congratulations on having the bravery to sit through three episodes of this evil sounding programme, which got an unfairly generous treatment in the guardian on the basis that the presenter has 'been there' and 'lived it' before she started believing in this bizarre mixture of Orville the Duck-style positive thinking and brutal social darwinism. The unemployed seem to have won the national scapegoat lottery, soon we will have street patrols in orange scabards on forced community service schemes roaming the streets smashing windows of anyone with their blinds still closed at 10, dragging them onto the streets and screaming at them to start believing in themselves or they'll get what's fucking coming to them.